You are here: Home / Tradition and Bharathanatyam 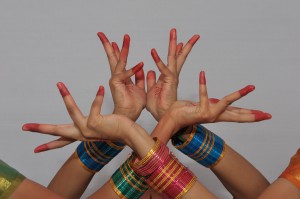 The Tamil Tradition and Bharathanatyam

The only Indian writings that incontestably predate the influence of classical Sanskrit are those in the Tamil Language. In ancient period of India the works of literature were composed in Sanskrit or one of the prakrits in the North of Tamil in the Dravidian South. Contemporary Tamil, preserving its veracity has embraced Sanskrit and other Languages in a positive manner creating the ever sweetness that the world stands for.

One of the ancient dance forms of India dating back to the 2nd Century BCE.

This dance type originated in the Hindu Temples of Southern India and is one of the most Graceful and sophisticated dance styles. Bharathanatyam strictly complies to the rules in the Natya Shastra which was written before 200 AD and attributed to a Hindu Sage named Bharatha Muni is the worlds most complete manual for all aspects of performance.