You are here: Home / About us / Shri Y. Yadavan 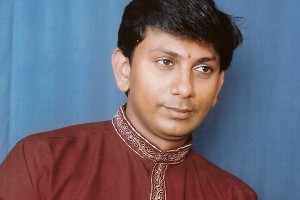 Yadavan son of “ Kalabhooshanam” Thiripurasundari and Mr Yoganantham hails from the family that is deep rooted in traditions of karnatic music and bharathanatyam. He trained from a young age in Srilanka, later studied in India under the renowned “Sangeetha kalanidhi B Rajam Iyer”in Chennai. Yadavan Holds a bachelor of arts in Indian music from Madras University, as well as a diploma from the music academy of Chennai for which he was awarded the “sangeetha rathna”title.

He also won the GNB memoriala ward for “The best male vocalist” in 1999 music academy annual competitions, and also broke records by being awarded nine other prizes in the same year. Yadavan has been performing on a regular basis in the UK, Switzerland, Australia, New Zealand, Srilanka, and India and is the vocalist for Kalaimanram.